Adventure Vacation to Argentina and Chile

On this adventure vacation to Argentina and Chile you will Trek in Glacier National Park and Torres del Paine, marvel at Perito Moreno Glacier, visit the ‘end of the Earth’ in Ushuaia, savour scenery in Patagonia and sophistication in Buenos Aires 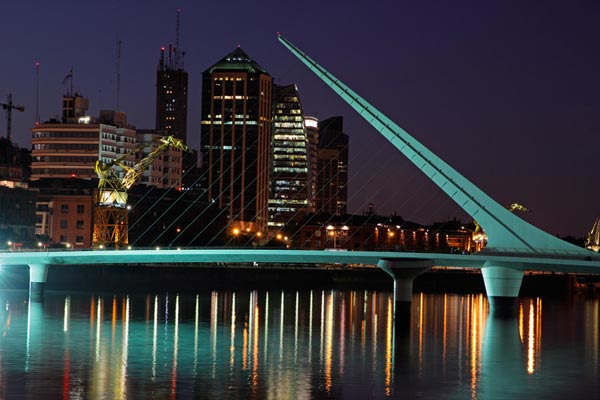 Explore Torres del Paine, encounter the Perito Moreno Glacier and hike Glacier National Park. With years of local experience, we employ the region’s best guides to reveal the extraordinary, bringing you to our exclusive campsites which provide stunning views of Patagonia. Prepare to be awed.

Itinerary for your Adventure Vacation to Argentina and Chile

Arrive at any time. As there are no planned activities, check into the hotel and enjoy the city.

There is much to do in this vibrant metropolis, including visiting the many museums, theatres and historical areas. Known as the ‘Paris of the Americas,’ Buenos Aires is a vibrant city full of life. Be sure to visit the districts of La Boca, Recoleta, and San Telmo, or catch a tango show at one of the many famous tanguerías or tango houses. Wander the pedestrian walkways and see some dancing in the streets. Whatever you do, Buenos Aires is sure to leave lasting memories.

The capital city of Argentina, Buenos Aires is the ultimate cosmopolitan city. Travellers find that it has more in common with the cities of Europe than the rest of South America. Nearly 40 per cent of Argentina’s 33 million citizens live in Greater Buenos Aires, and the Porteños are justifiably proud of their home. The city is comprised of a number of distinct neighbourhoods, some of which have become top tourist draws. For many, the highlight of their time in the capital is a visit to San Telmo for the weekend antiques market and street artists’ displays. La Boca was originally settled by the successive waves of immigrants that contribute to the capital’s unique character. Its brightly coloured walls and buildings draw Porteños and tourists alike. Posh Recoleta, with its cafés, museums and cemetery, is a pleasant place to spend an afternoon.

During colonial days, Buenos Aires was the seat of the Viceroy of La Plata. Almost completely rebuilt since the turn of the century, the heart of the city is the Plaza de Mayo, with the historic Cabildo (Town Hall), where the Independence movement was first planned, the Casa Rosada (Government Palace) and the Cathedral, where San Martín, the father of Argentine independence, is buried.

After exploring the city, settle your weary feet and enjoy a drink in one of the many sidewalk cafés and restaurants and you can begin to understand the contemplative Argentine way of life. Try the succulent bifé and parrilladas, as it may be your last chance. Dig in and enjoy!

Fly south to the Province of Santa Cruz and the town of El Calafate before transferring overland to El Chaltén. Enjoy a full-day hike within Glacier National Park’s northern end, where granite pinnacles spiral upward into the sky from the third largest ice field on earth. Hike to Laguna de Los Tres to fully appreciate majestic Cerro Fitzroy/Chaltén (3441 m). Free day to explore the town. Return to to El Calafate in the late afternoon of Day 4. 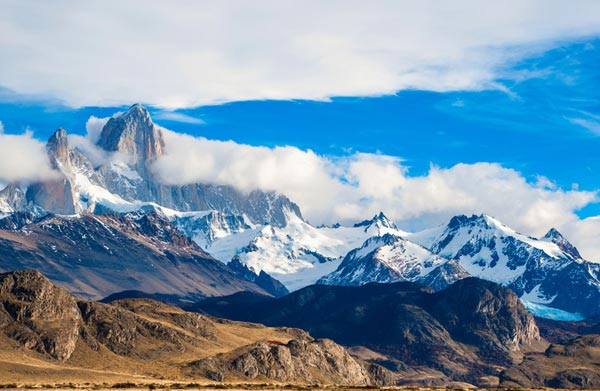 Argentina is the second giant of South America, with a landscape nearly as varied as its people. Modern and sophisticated, cosmopolitan Argentina has much more in common with Europe than with the rest of its neighbours. But if Buenos Aires is the heart of the country, Patagonia and the southern Pampas in Santa Cruz Province are its soul. Luckily, this is the very region we explore, trekking within Glacier National Park for the grand rewards of the trail. Hikes are moderate, with clearly marked and well-maintained trails, though there are some more challenging sections. Parque Nacional Los Glaciares has some of the most spectacular natural sights you will see in your lifetime.

The town of El Chaltén is located in the north end of the park. Hikers and climbers from around the globe congregate here, waiting for good weather, to undertake the challenges presented by nature. The atmosphere is laid back and the mountains and Beech forests here are very similar to Paine. The hikes to Laguna de Los Tres and Laguna Torre traverse spectacular glacial valleys to obtain awe-inspiring views of these peaks of ice and granite.

Return to El Calafate, on the shores of Lago Argentino. Drive west towards the lofty peaks takes us to the dynamic Moreno Glacier, within Glacier National Park. We may spot condors, rheas, eagles or flamingos en route, but the real star of the day is the glacier itself, located at the southern terminus of Glacier National Park. Sliding down from atop the southern continental ice field, Moreno’s 60m (197 ft) wall of ice sporadically chokes off the narrow Canal de los Tempanos (Channel of Ice Bergs) creating a natural ice dam, which eventually explodes in a dynamic display of force. 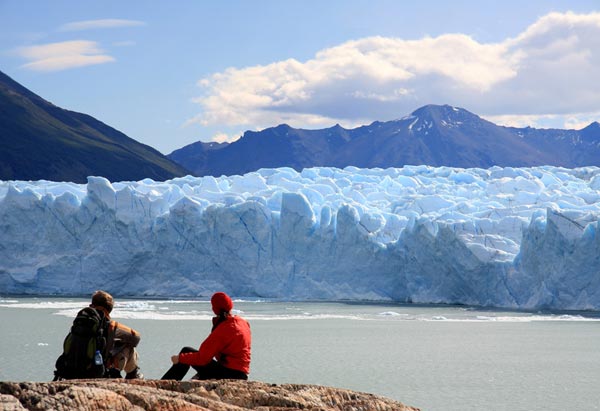 The Southern Patagonian ice field, the third largest on the planet (after Antarctica and Greenland) is the source of all the area’s glaciers, including Moreno, Onelli, Viedma and Upsala. Moreno Glacier, this massive river of frozen water and huge chunks of ice moves down constantly crashing into the lake waters below. Very dynamic, Moreno is one of the very few glaciers left in the world that is in equilibrium. It is simply enormous: 1 km (half a mile) wide and 60m (196 ft) high.

Continue the journey south along the unpaved road to the border of Chile. Spend a relaxing evening in scenic Puerto Natales before the trip to spectacular Paine National Park. Spend the next two nights camping among the dramatic granite pillars that dominate the landscape. From the campsite, take day hikes to observe some of the striking scenery of this protected area, home to a variety of animal and plant life. Return to Puerto Natales on the afternoon of day 9. 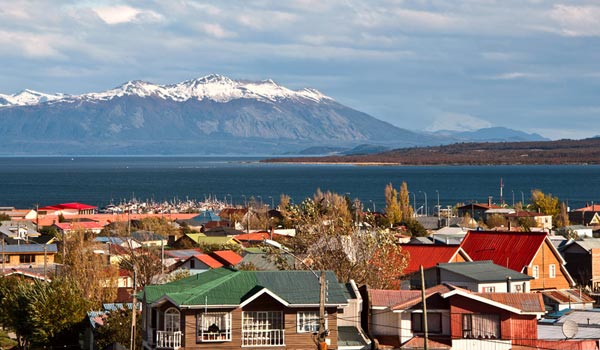 The granite Towers of Paine make a sudden and dramatic appearance on the horizon in the midst of a flat, dry, wind-swept plain. Despite the almost constant summer winds, this is some of the finest trekking country in Chile. Endowed with severe mountains, sparkling lakes, waterfalls and glaciers, as well as herds of guanacos, majestic condors, flocks of pink flamingos and large Patagonian hares, the park’s international attraction is immediately evident.

Words cannot describe the majesty and beauty of this National Park in Chilean Patagonia. Few people have the opportunity to see this area and those who do will find it difficult to forget its vivid colours and tranquility. One of the many thriving legends concerns the origin of the park’s name. Locals insist that ìpaineî is derived from the Tehuelche Indian word for the colour blue, while others say it is the name of an original Welsh settler to the area. Once a large sheep estancia, the park was established in 1959 as the Parque Nacional Lago Grey. Prior to this, baqueanos (cowboys) grazed their flocks here and fires occasionally burnt out of control. The devastation wrought near Lago Grey remains visible to this day, with large areas of burnt forest and charred logs. More land was added to the park in 1962 and the name was changed to its present one. The Torre (Tower) Sur rises 2900m (9512 ft) above sea level, the Torre Central is 2850m (9348 ft) high and the Torre Norte measures 2600m (8528 ft). The Cuernos (Horns) del Paine, massive blocks of various rock layers and visible from great distances, are as spectacular as the towers themselves.

A town of brightly coloured corrugated tin houses, Puerto Natales lies on the Seno de Ultima Esperanza (Last Hope Sound, so named by a group of desperate early explorers) and is home to the once large and important Bories meat processing plant. These days most of its residents rely on tourism as a source of income. The surrounding countryside of foothills and mountains beckons the explorer and it is the logical jumping-off point for an excursion into Paine National Park.

Encompassing a narrow strip of land between the Pacific Ocean and the high peaks of the Andes, approximately 180 km (112 miles) wide, but with a coastline stretching over 4300 km (14104 ft), Chile’s “geografia loca” (as termed by Benjamin Subercasseaux) includes the driest desert, the Atacama in the north, the agriculturally-rich Central Valley, snow-covered volcanoes, forests and tranquil lakes of the near south, and the wild and windswept glaciers and fjords of the far south. Discover magnificent trekking country within this last region, where guanacos, ñandues (rheas), condors, pink flamingos and magellanic penguins abound. The region also boasts some of the world’s finest salmon and trout fishing, and the cuisine at times rivals the natural setting. Camping equipment (except as noted previously) is provided, as are all meals (and cook), during the Paine trek. Hikes are moderate to difficult, along clearly marked trails. Participants should be prepared for hikes ranging in duration from 5-8 hours per day and unpredictable weather. A gold mine of undiscovered destinations and surprises, this country and its friendly and hospitable people will no doubt make a mark on your memories and leave you with a smile.

Day 8
Approximate distance hiked: 24 km
Estimate hike time: 6-8 hours (depending on how far you go into the valley)

At the very end of the Chilean mainland, looking across the Straits of Magellan to Porvenir and Tierra del Fuego, Punta Arenas is a city of about 100 000 people. Chile’s southernmost city, it is the capital of the 12th region (Magallanes). Discoveries of offshore oil and gas, as well as a burgeoning adventure tourism industry have fuelled much of its recent development, although the traditional sheep estancías remain a significant part of the economy and culture. Punta Arenas is a surprisingly large and well-developed city and an important Chilean naval base. Monuments to the early Yugoslav settlers and to the hardy ranchers and explorers who pioneered the area are scattered throughout the city, and the enormous cemetery contains the crypts of many of the city’s historically leading citizens.

An hour’s drive from Punta Arenas, the Otway Sound penguin colony is the result of a successful protection program that has brought back to healthy numbers the once endangered population. These charming birds are here from October to April, with chicks hatching in early December. En route keep an eye out for rheas, flamingos, and a variety of other birds. Foxes and skunks occasionally make an appearance as well. Return to Punta Arenas for the night, with some time to explore this charming city.

Returning to Argentina, head to the province of Tierra del Fuego and Ushuaia, the southernmost city in the world, on the shores of the Beagle Channel. Ushuaia actually means “the bay facing westward” in the language of the original Yamaná inhabitants. Once a penal colony for political prisoners as well as hardened criminals (the presidio was disbanded in the 1940s), Ushuaia is now a major tourist attraction, particularly for people cruising to Antarctica. The town of 70 000 is also a major ski resort area for both alpine and cross-country skiers and offers magnificent hiking in Parque Nacional Tierra del Fuego, the only coastal national park in Argentina.

Ushuaia is our base for a cruise along the Beagle Channel (named after Darwin’s expedition vessel) to observe the marine wildlife amongst its small islands and inlets. Explore this picturesque town before returning to end the tour in cosmopolitan Buenos Aires.

Return flight to Buenos Aires for a final night on the town.